The ACC Commission has approved the final design proposal for the Murmur (Trail Creek) Train Trestle. The article below has been updated to reflect these new developments. The project will begin to move into the development phase. Currently it stands that only the center portion of the wooden trestle structure will remain. For more information on the design, see below.

On April 12th, 1983, the debut album of a then relatively unknown band named R.E.M. was released.

Entitled Murmur, the album quickly garnered critical acclaim and wiggled through the formidable fence separating college and mainstream radio. Rolling Stone magazine would choose it as the Best Album of 1983 over pop music juggernauts like Thriller by Michael Jackson and Synchronicity by The Police. Murmur helped change the landscape of 80s music.

The enigmatic packaging of Murmur was also groundbreaking and spoke to both the physical environs of the band’s homebase of Athens, GA and the DIY, low-fi aspects of college radio. The cover featured the grainy image of an impenetrable field of kudzu, the Asian vine that has been slowly covering the southern U.S.

The back of the album, a sepia-toned image of an old railroad trestle, was equally cryptic, unless you were familiar enough with Athens to know of it’s deep history of industry, mills, and the railroad. (The kudzu patch on the cover also happens to be next to train tracks.) The trestle, now commonly referred to as “The Murmur Trestle” has been a tourist attraction in Athens ever since, providing a physical landmark for a record album that proved to be a landmark in modern music.

The Murmur Trestle also appears in a fun, highly-creative film by the Elephant 6 Recording Group entitled Major Organ and the Adding Machine. The nearly 26 minute film premiered in 2008 and features members from Neutral Milk Hotel, Of Montreal, Elf Power, Olivia Tremor Control, and many others.

You can watch Major Organ and the Adding Machine in its entirety below!

The Murmur Trestle’s Future is Uncertain

On April 12th, 2019, thirty six years to the day of the release of Murmur, R.E.M. fans had one of the last opportunities to speak out via an online poll to hopefully not only save the trestle from demolition, but maybe give it new life and purpose, preserving it for future generations. The project is currently moving through the concept phase and is once again looking for public input. Please see the link below!

The main goal of the team is to connect two sections of a Rails to Trail public pathway called the Firefly Trail. This trail will be a huge boon to the local Athens community and provide a car-free cycling and footpath link to many surrounding towns. The original track bed that the Firefly Trail follows utilized the trestle to cross the small valley around Trail Creek, now known as Dudley Park.

In September 2019, the Firefly Trail Project Team shared their final design concept with the public. Sadly, they want to go in a direction that will eradicate a great deal of the original trestle and substantially alter the look and feel of the existing historic structure. This design will go in front of the Athens Clarke County Commissioners in October and, if approved, is a done deal.

For music fans and history buffs, the proposed design is less than ideal, as it replaces a large section of the timbered trestle with a welded steel structure. With so few historic timbered train trestles of this magnitude remaining in the U.S., any direction other than a complete period-correct restoration is a lost opportunity and shirks our responsibility to preserve history for future generations.

While it is understandable that restoring the original trestle would mean the replacement of the majority of the timbers, the result would have been a structure more historically accurate and cheaper at the outset of than what the project team is currently proposing.

Additionally, because we would have exactly preserved what is seen on the Murmur album cover, the trestle’s contribution to the music tourist industry in Athens should have helped defray it’s long term maintenance cost.

The original options for the project are below. Basically the final design concept is a mix of Concepts “A” and “B” with a greater emphasis on “B”.

To learn more about the project, please watch the video below.

The History of The Murmur Trestle

Built in 1883, by The Georgia Railroad, the trestle and an accompanying truss bridge (now gone) allowed trains to cross Trail Creek and the Oconee River on an extension into downtown Athens.

The downtown Athens track extension was abandoned by the then owners, CSX Transportation, in 1984. In 2000, demolition of the trestle was started, but public outcry halted its demise and a fundraising effort of R.E.M. fans led to the purchase of the trestle by Athens-Clarke County in 2001.

The trestle, constructed of creosote-treated pilings resting on concrete footings, carried trains pulled by 400,000 lb steam locomotives for nearly 100 years. While it is likely that very little if any of the original 1883 wood is still present in the trestle due to replacement and repair over the years, the beauty, strength, and longevity of 19th century wooden railroad trestles is hard to deny.

What Do You Think?

How do you feel about the proposed new look for the Trail Creek Bridge and the degree of preservation for the Murmur Trestle?

Will the countless R.E.M. fans that visit Athens and take their picture with the trestle in the background be satisfied with the proposed design?

Are we missing an opportunity to preserve a rare and valuable piece of railroad history for future generations?

Is what is being preserved enough?

Note: This page will be updated with current news on the status of the trestle

Located in Dudley Park, the trestle is the nexus of the Oconee Greenway and the Firefly Trail. The park offers paved wooden trails, beautiful views of the river, and open expanses of grass to spread a picnic blanket out on. It is only a short walk to downtown Athens.

For history buffs, there is interesting and informative signage all along the Oconee Greenway near the park detailing the area’s history. If you follow the Oconee Greenway either way from underneath the Murmur Trestle, you will end up at the Chicopee Building, a large brick structure used by the University of Georgia. The building dates to 1862 and was originally the Cook and Brother Confederate Armory. After the Civil War it was used as a mill.

Automatic for the People

For music fans, especially R.E.M. fans, there is much to see only a short walk from the trestle.

If you follow the Firefly Trail from the top of the trestle on the downtown side, and then go right on the sidewalk when the trail ends, you will see a bright green building near the bottom of the hill (just across the river from the historic armory noted above). This is Weaver D’s Delicious Fine Foods, a local soul food restaurant made famous when R.E.M. paid homage to the local institution by using (with permission) the restaurants “Automatic For The People” slogan as the title for their blockbuster 1992 album release.

Order some Weaver D’s to go and walk or ride your bike back to Dudley Park for a picnic. There are many picnic tables near the trestle, but if you want more sun, the grassy field with giant boulders is a great place to enjoy your authentic Southern cuisine alfresco.

On the opposite side of both Oak St and the Oconee River from Dudley Park is the site of the church where R.E.M.had their first show on April 5th, 1980. The church, which was built in 1869, was demolished in 1990 to make room for condominiums. Fortunately, public outcry encouraged the saving of the steeple, which continues to stand today.

If you want to learn more about that era of Athens music history, Athens, GA. Inside/Out is a great film to see. Released in 1988, the film features great club performance footage and fun interviews with musicians, artists, and some of the people that made up the unorthodox, but highly creative landscape of the 1980s Athens music scene. You can find it on Amazon.

Here’s hoping that the historic Murmur Trestle will be preserved for future generations of music and train fans! 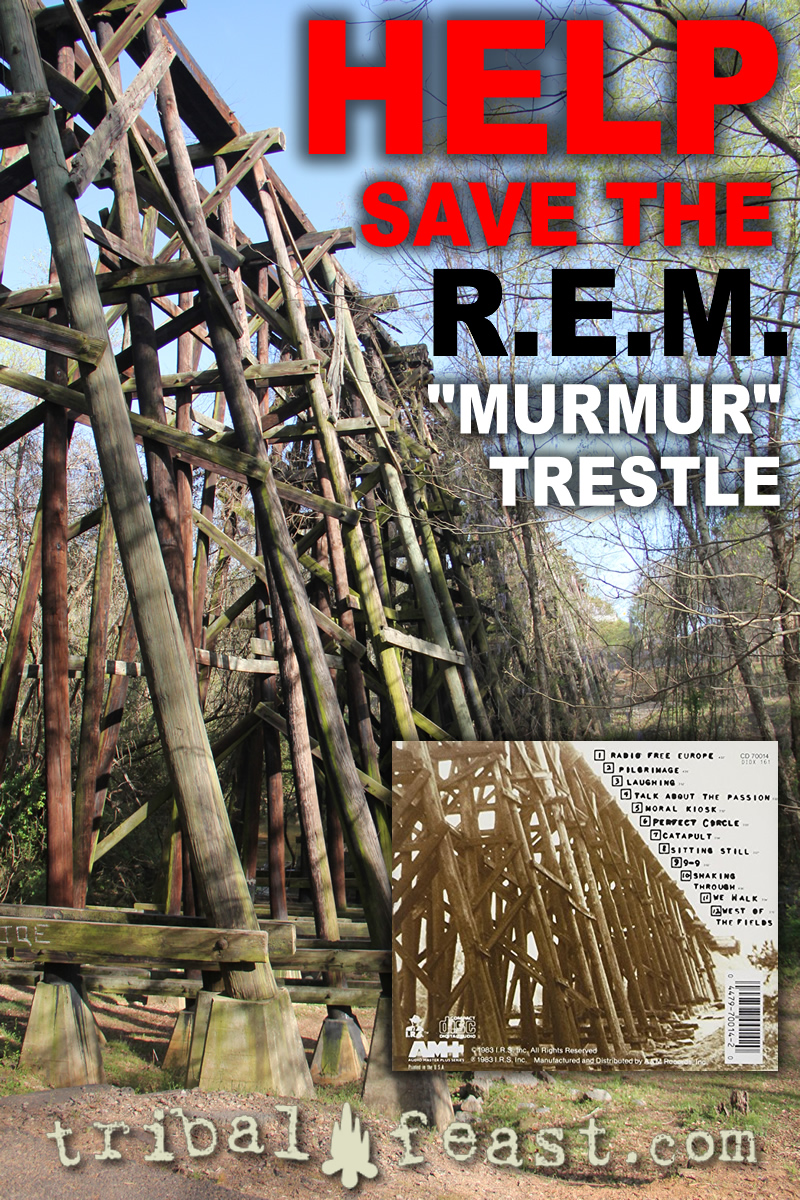 Tribal Feast is an Adventure Picnicking, Paddling, Camping, and Outdoor Lifestyle blog based out of Athens, GA. Come along with us as we take you along on fun, low-budget adventures.

Do you have a question or comment, or want information regarding sponsorship, gear reviews, or advertising opportunities with us? Please visit our WTF page. If you don’t find what you are looking for, just fill out the webform and we’ll get back to you as soon as we get home from the trail.

This site is a participant in affiliate programs like the Amazon Services LLC Associates Program, an affiliate advertising program designed to provide a means for sites to earn advertising fees by advertising and linking to Amazon.com.